Measuring method named after Ernst Abbe used to determine the focal length and the position of the principal planes of a lens singlet or a lens system on the optical axis.

Lens system: Attached to all lenses rigidly to each other on a tab and defining a reference point on this fixed, is obtained by shifting the object and screen to different focus positions three series of measurements of the distance x to the object, the distance x ' to the image and the image size B . With the image scale  the following equations result:

The parameters h , h ' correspond to the distances between the object or image-side main plane and the reference point. This and the focal length f can be obtained from the measurement series by means of a linear regression. f and f 'often have the same amount but a different sign.

The ABBE number is a dimensionless parameter named after Ernst Abbe. also known as the V-number or constringence of a transparent material, is an approximate measure of the material's dispersion (change of refractive index versus wavelength).

The ABBE number is mainly used to characterize and monitor the quality of glasses and polymers used in lens production.

The Abbe number V of a material is defined as

where  and nC are the refractive indices of the material at the wavelengths of the Fraunhofer D, F and C spectral lines

Abbe numbers are used to classify glass and other optically transparent materials. For example, flint glass has V<50 and crown glass has V >50. Typical values of V range from around 20 for very dense flint glass, around 30 for polycarbonate plastics, and up to 65 for very light crown glass, and up to 85 for fluor-crown glass. Abbe numbers are only a useful measure of dispersion for visible light, and for other wavelengths, or for higher precision work, the group velocity dispersion is used.

Alternate definitions of the Abbe number are used in some contexts. The value  is given by

which defines the Abbe number with respect to the yellow Fraunhofer d (or D3) helium line at 587.5618 nm wavelength. It can also be defined at the green mercury E-line at 546.073 nm: 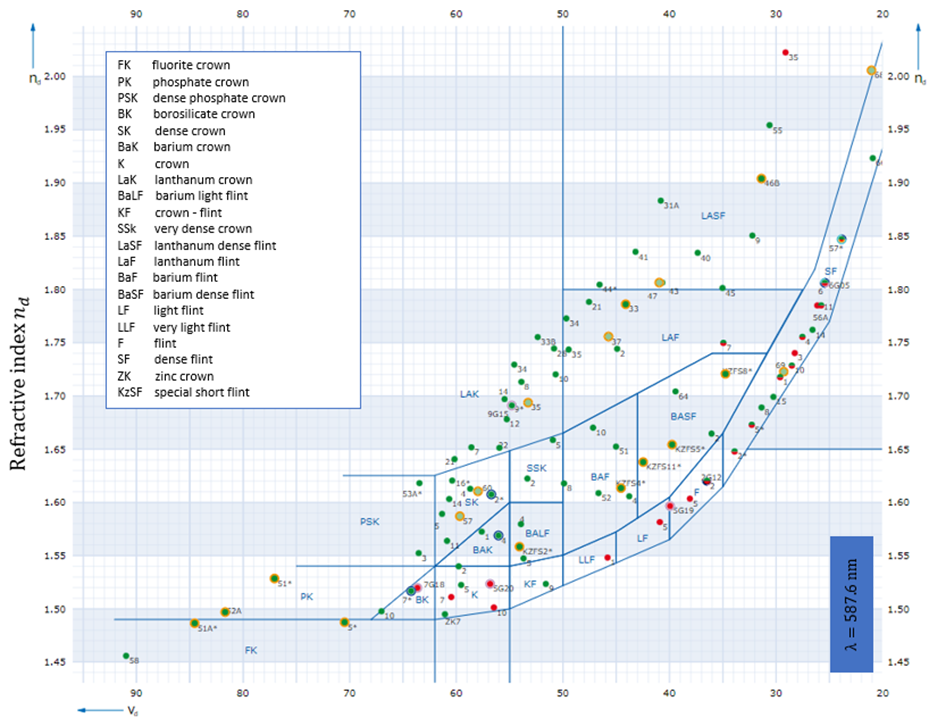 The American Blood Commission (ABC) developed this symbol as a bar code standard for automated systems in the blood service community. The particular symbology used for the ABC symbol is Codabar.

Aberration for lenses made with spherical surfaces

For lenses made with spherical surfaces, rays which are parallel to the optic axis but at different distances from the optic axis fail to converge to the same point. If the center of the image stay in focus an bright, the edges of the field apprear blurry and dimmeter.

Light of different wavelengths are refracted by a lens at different strengths i.e. the distance of the Wavelength of a lens deviates minimally for each color.